March 26-8, 2018 Jamie travelled to Denmark to participate in the International Wind Energy Association Wind Task 28: Social Acceptance of Wind Energy at the Danish Technical University in Roskilde, Denmark. There were representatives from Denmark, Norway, Gernmany, Finland, Switzerland, U.S.A., Britain, Canada, and the Netherlands. All countries are facing challenges with increasing resistance to wind turbine developments, including those with a reputation for community-based wind development and relatively low levels of citizen concern (e.g., Denmark). 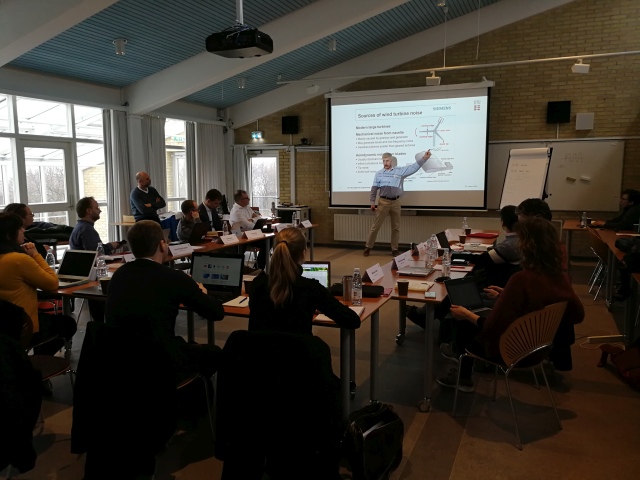 Welcome Parveen to the research team

Parveen Grewal started her MA in Geography at Western in January of 2018. Her research will involve comparative qualitative case studies interviewing mainly residents near turbines. See her profile here.

This week Jamie participated in the Renewables in Remote Communities Conference in Whitehorse, Yukon. There were over 200 delegates including Indigenous leaders, federal government, NGOs and academia. With new federal money being invested in reducing the reliance on costly diesel for energy in these communities the discussions were quite lively. While wind energy is certainly considered to be one of the many renewable technologies that will assist in this transition, the take-home messages from the conference include the need to develop trusting relationships between stakeholders and continue to build capacity in these relatively small communities - particularly among youth. A sacred fire was lit for the duration of the conference (see below), tended by two Fire Keepers from the local Kwanlin Dün First Nation. 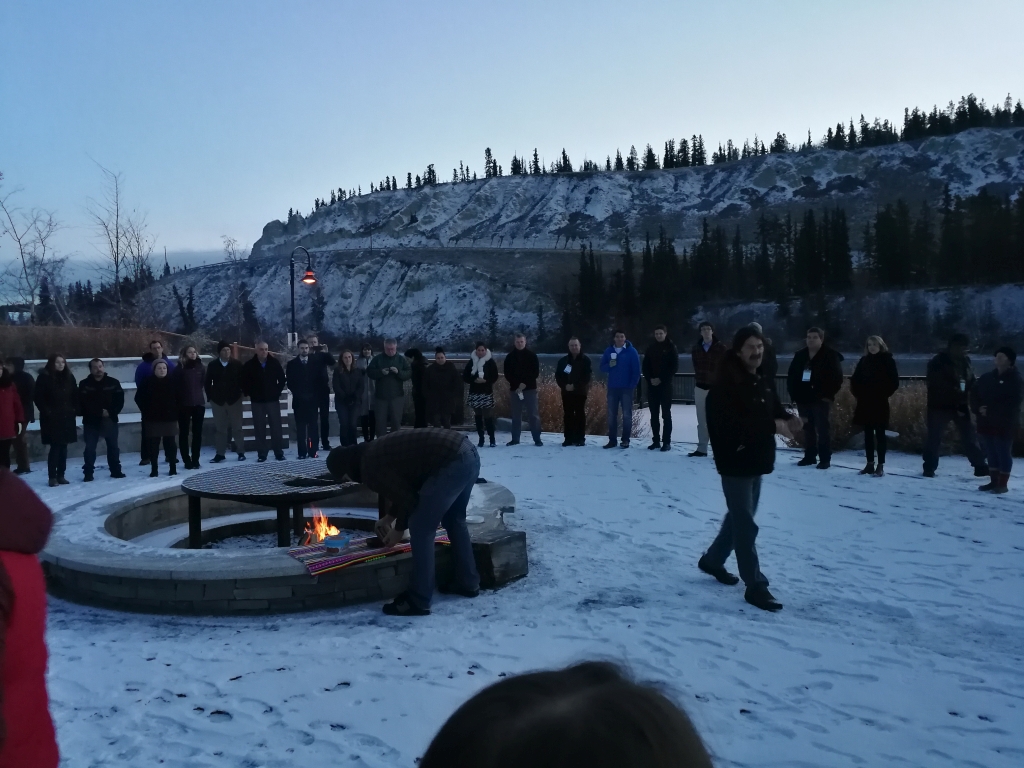 Welcome Carelle to the research team

Carelle Mang-Benza started her MA at Western this month. Her research will involve a policy (and perhaps media) analysis of community wind energy in the three case-study jurisdictions. See her profile here.

Dr. Walker off to Queen's, Postdoc A SHARED Future

Chad is now in Kingston Ontario at Queen's University, working with Heather Castleden as a postdoctoral fellow on the A SHARED Future project. Dr. Baxter is a collaborator on that project and Dr. Walker's new position will help further unite the projects in their shared interest in renewable (wind) energy in Indigenous communities.

This week the full research team met at the University of Western Ontario to discuss qualitative data analysis and a range of study design issues. It was a very productive two and half days which included a fieldtrip to Bruce County for us investigators to witness first-hand some of the impacts of turbines here in Ontario. We also experienced a turbine up close and heard the characteristic "swish" while standing directly underneath. Thanks again to all of our hosts. 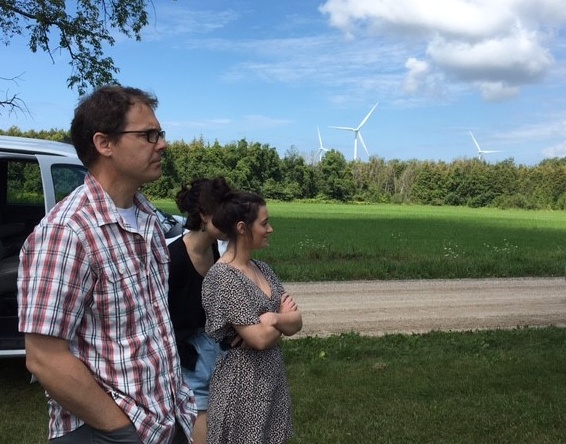 In response to a request from the editors of Nature Energy Jamie has written a comment piece entitled "Participation promotes acceptance", based a recent paper by Liebe, Bartczak, and Meyerhoff (2017). Their paper is quite good and unique for the methodological use of vignettes. The findings of the Leibe et al. study corroborate what others have found - that better community participation needs to be at the core of wind turbine siting policy. Baxter argues that "Community-based" wind energy may be relatively meaningless to local residents without decision-making power. A link to the piece can be found on the documents page.

Congratulations to Chad Walker who defended his PhD thesis on June 27. Chad opened the morning with a public lecture to a packed room of his academic peers, family and friends and followed with his exam. Thanks to Drs. Dayna Scott (York U.) Guy Holburn, Mike Buzzelli, and Isaac Luginaah for serving on the examination committee. Chad will be applying for academic positions while he continues to write up material from the Metcalf-funded COAREP series of studies and helps out with the current SSHRC-funded series of Meaning of Community Wind Energy (MOCWE) studies. Chad has published to peer-reviewed academic journal articles from his thesis - one in the Journal of Environmental Policy and Planning and the other in Energy Research and Social Science and these can be found on the documents page.

Last week I attended a workshop for a project both Chantelle and I are involved with. A SHARED Future - is a CIHR-funded project led by Heather Castleden and Diana Lewis and includes over 60 stakeholders including several Indigenous Scholars and community members. We were hosted by the T’Sou-ke Nation on the west coast and learned about their solar-based renewable energy initiatives (they also grow wasabi as a cash crop) amid sessions that allowed the team members to get to know each other and scope the project moving forward. A fantastic, energizing - and at times emotional - gathering. Learning much about doing research with Indigenous communities. Community-based wind energy is only one of many projects that will be involved including 40+ turbine Mesgi’g Ugju’s’n wind project. 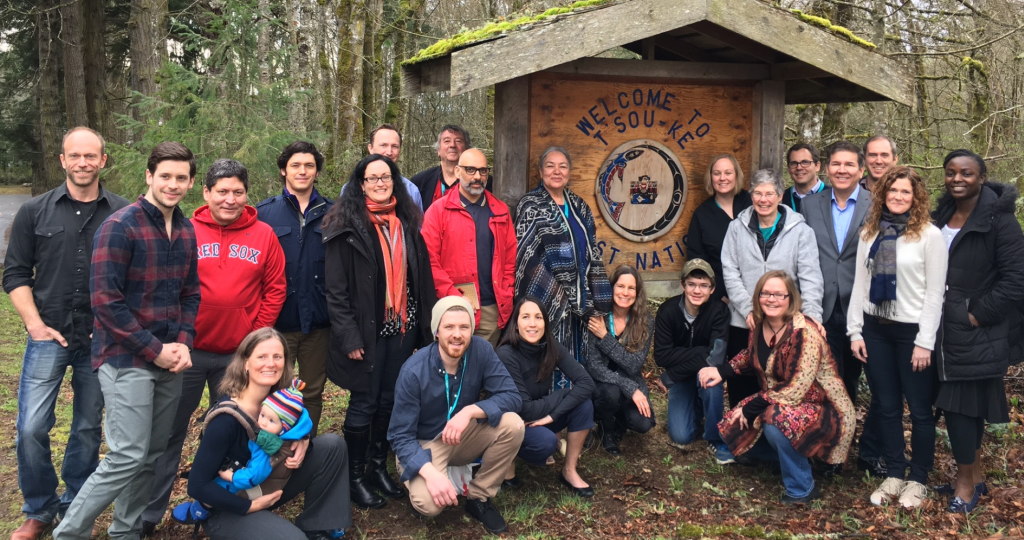 We issued a press release about the "toolkit" studies on Thurs March 2, 2017 and it has been picked up by a number of media outlets . Links to the various stories - some based on interviews with Chad - are available on the mobilize page.

The final "toolkit" document summarizing our findings for study 1 is now available. For more details see the mobilize page or the documents page.

On Thurs, Dec. 8, 2016 we will be holding our end-of-project workshop for the "toolkit" series of studies funded by the Metcalf Foundation. The workshop will focus on findings from the study and will allow for interactive feedback from stakeholders. Some will participate in person, while others, particularly those from Nova Scotia, will participate via webinar software online. For more details see the mobilize page.

We are looking for bright and enthusiastic students to conduct a series of new studies on the "Meaning of Community-based Wind Energy". COAREP has expanded with 5 years of funding from the Social Sciences and Humanities Research Council of Canada (SSHRC) and an interdisciplinary research team (a future news item). The basic premise of the studies is to learn from communities already living with turbines under a strong community-based model and compare their experiences with those who are not (comparative case studies). Media and policy discourse analysis studies are also involved. The SSHRC funds will pay for materials and field expenses, annual summer stipends, and conference travel. Students may apply to programs at Western (Geography or FIMS), Dalhousie or Queen's Belfast. Details of the studies will appear at the studies link in the coming months. Interested students contact uwo.coarep@gmail.com.

Study 1: All data collected and being analyzed

Thanks to the work of Chad Walker all of the interview and survey data are collected and being analyzed. Chad completed 47 interviews (25 Ontario, 22 Nova Scotia) and has 239 completed resident survey questionnaires (127 Ontario, 112 Nova Scotia) along with 12 questionnaires from wind energy developers. The analysis will take a few months and will be written up into a report that will be posted on this website this coming Spring. We will hold a workshop then to discuss the findings with participants other key stakeholders.

In the winter of 2015 the CoAREP group attended a workshop entitled the "Social and community aspects of wind power in Ontario" at Queen's University, Kingston, ON - hosted by Warren Mabee and Stewart Fast. By way of follow-up Stewart enlisted a cross-section of the group including representatives from academia, residents and developers to draft a manuscript. Yesterday, that manuscript was published in Nature Energy. See the documents section for more details.

The full title of the paper, "Adding insult to injury: The development of psychosocial stress in Ontario wind turbine communities", published in the journal Social Science and Medicine is the third paper on the Port Burwell and Clear Creek case comparisons of two neighbouring communities experiencing rather different social outcomes. The paper draws on the environmental stress and coping literature to trace social impacts of wind turbine facilty siting and policy. The tendency of the system to exacerbate local conflict is explored. This is the sixt paper from the coarep group, particularly Chad and Emmanuel.

Emmanuel, our media analysis expert working with Dr. Mike Buzzelli, sucessfully defended his thesis. The thesis is titled: Wind Energy Development in Ontario: Factors Influencing Deployment and Policy Outcomes and is outlined as Study 2. The full thesis will be made available here. Congratulations Emmanuel!

Recently our survey questionnaire was mailed out to residents, developers, and local politicians in the study communities near wind turbines. The goal is to learn more about turbine siting and policy preferences. See more details about Study 1 here. The questionnaire has been made available to a random selection of people and they can respond on paper in postage-paid envelopes or online using a unque code provided in the letter of invitation.

We have spoken with about 40 people in Ontario and Nova Scotia in in-depth interviews face-to-face, as well as by Skype and phone. One case study is in the Adelaide-Metcalfe area and we would like to speak with landowners with signed leases for turbines on their land. We have heard considerable talk about lease holders from participants so far but we also want to learn about lease-holder experiences first-hand. We are asking individual landowners to sit down for a one-on-one interview (60-120 minutes) at a time and place of their choosing. The interviews will be for research purposes to potentially improve processes for turbine siting and confidentialty and anonymity among our highest priorities. To participate, please contact Chad Walker (cwalke26@uwo.ca / 519 661 2111 ex. 82818) or

Read more about the study here.

Fieldwork in Ontario and Nova Scotia

Over the summer, Chad spent 6 weeks in Nova Scotia conducting interviews with a variety of stakeholders across the province. A total of 21 interviews were completed with local residents, large and small-scale developers, and municipal councilors/staff involved in wind turbine siting. Chad travelled to and spoke with people from Chester (South Canoe), Mabou (South Cape Mabou), Canso (Sable Wind), Truro (Greenfield), Antigonish (Fairmont), and Watt Section (Watts Wind). This fall, we will be inviting people for interviews in the Niagara region and Adelaide-Metcalfe area in Ontario. Specifically, we are interested in speaking with people who live within 2km of a turbine in Wainfleet, ON or Adelaide-Metcalfe, ON. Analysis of the interviews will continue in the months ahead looking towards the development and distribution of a survey on best practices and alternative community engagement for wind energy development which will be distributed sometime in 2015.

Over the last few months, Emmanuel has completed a media analysis of approximately 2000 newspaper articles on wind energy development in Ontario. Articles were sampled from national, metropolitan and local newspapers circulated within the province. Drawing from key themes which emerged in the media analysis, Emmanuel is also in the process of conducting interviews with wind energy development organizations within Ontario.

Today we sent out a press release documenting some of our findings in case studies in Port Burwell and Clear Creek Ontario. The details of the full paper are in the documents section and we are happy to share a copy of the paper with individuals upon request. The story was picked up by a number of local and Ontario media including London Free Press, CBC Morning (London) with Kerry McKee, CBC Ontario Morning with Wei Chen, AM980 with Bill Needles, and themotts.ca.

Chad, Isaac and Jamie were at the Association of American Geographers meeting in Tampa to meet other geographers interested in wind turbines and wind turbine communities. We attended several sessions concerning renewable energy, and co-organized a session entitled "Geographic Perspectives on Wind Energy" with Carol Atkinson-Palombo from the University of Connecticut. We learned about ongoing and completed research in the U.S., Europe and Canada. We hope to build on the these connections moving forward.